In the Path of Exile, players will encounter various monsters and bosses, but which bosses are the hardest to beat? Here, we will introduce you to the 5 most difficult bosses, namely Aul, The Crystal King, Sirus, Awakener Of Worlds, Hall Of Grandmasters, Uber Atziri and Doedre The Vile. 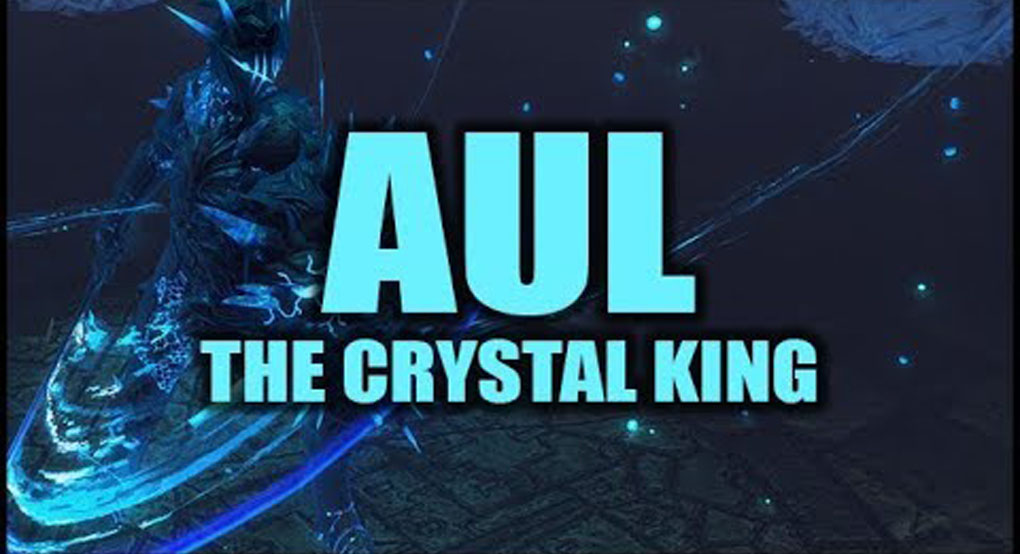 Aul, the Crystal King is one of the three major bosses found within the Azurite Mines. He is located in The Abyssal Sanctum. Without modifiers, this boss seems to be a knight with no special mechanics and a love for Cold damage. The boss can only spawn below 171 depth.

A boss exclusive to Path of Exile’s Delve league, Aul’s difficulty depends on which level you find him in the mines. When you do face him, Aul will have modifiers that make him stronger. The further you are in Delve, the stronger Aul and his minions will be. That being said, his rarity meant several players – including those who made more than 20 characters throughout the league’s duration – didn’t find him till much later and that too on the deeper levels. Aul’s strength is amplified based on the modifiers of that level so it wasn’t impossible for him to move at incredible speeds and one-shot expert players.

Players will need to manage Flares to keep the Darkness’ DoT away, all while facing a boss that can instantly freeze you and kill you in two strikes. Combined with his ludicrous health pool that scales with Delve depth, Aul is easily the hardest boss in the Path of Exile. 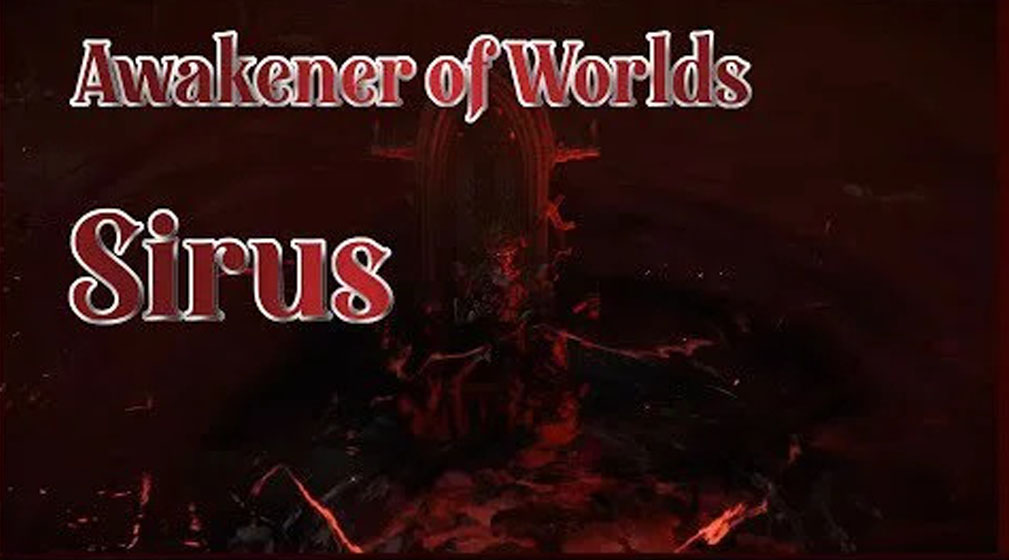 Sirus, Awakener of Worlds is the main antagonist of the Conquerors of the Atlas expansion. He acts as the final boss of the Atlas of Worlds, and the leader of the other conquerors: Al-Hezmin, the Hunter, Baran, the Crusader, Drox, the Warlord and Veritania, the Redeemer.

Sirus takes the mechanics of Elder and Shaper and cranks it up to 11. Only the best player builds stand a chance against this deadly boss.

Ground effects cover the arena, dealing thousands of damage a second to even the tankiest of builds. Sirus fires multiple beams that make the Shaper seem easy. Meteors crash down, forcing players to complete a maze or risk instantly dying. The payoff is huge, gaining a crafting item to merge two influences onto one item. Sirus makes you work for this power, though. 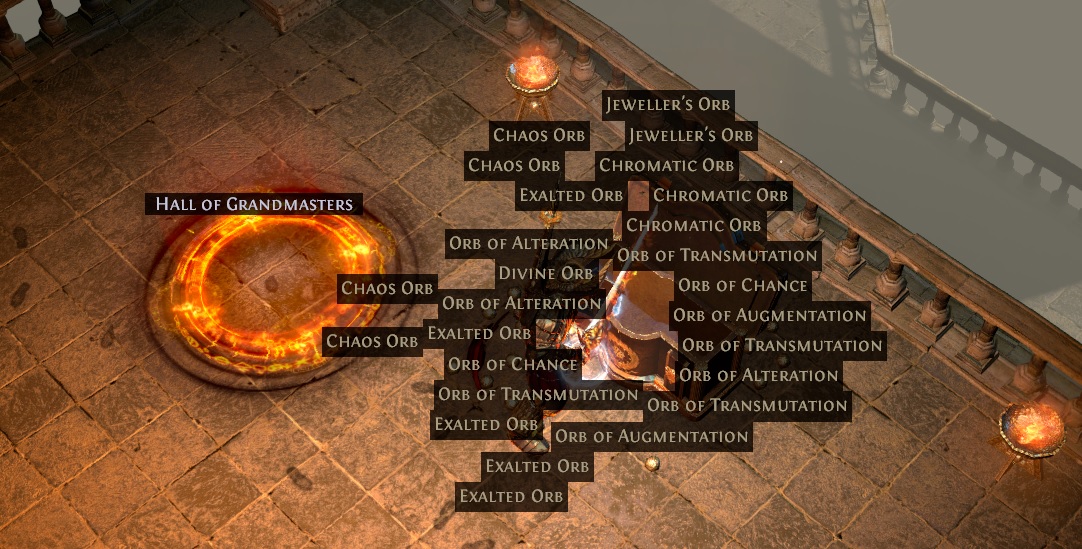 Summoners, hit-based builds, and the clearest speed builds are going to struggle to complete the Hall Of Grandmasters Map.

The map consists of a foyer with several large doorways. Between each door is a hall of 50 grandmasters, separated by forcefields so you fight waves of 5 at a time. Currently, there are 6 halls (Hall of the Heroes, Hall of the Eternal, Hall of the Fallen, Hall of the Twisted, Hall of the Blessed, and Hall of the PoE Exalted), making 150 Grandmasters or 30 waves in the map. The waves are randomly organized by approximate difficulty and get progressively harder.

At the end of each hall, there is a unique chest called Grandmaster’s Cache.

According to the development plan, “Grandmasters using Vaal Skills will gain one Vaal Soul per skill every five seconds. It’s currently possible to encounter Tormented Spirits on the map. You will not encounter Strongboxes (other than those at the end of each hall) or Rogue Exiles.

Instead of containing randomly spawned monsters as in most other maps, the Hall of Grandmasters includes other exiles based on characters of players who purchased a Grandmaster supporter pack. Effectively, this is a boss gauntlet. PvP scaling is also enabled, resulting in any summoner build instantly dying. Most characters dodge or block, making most hit-based builds obsolete. If you thought Rogue Exiles were tough, try to complete the Hall of Grandmasters. 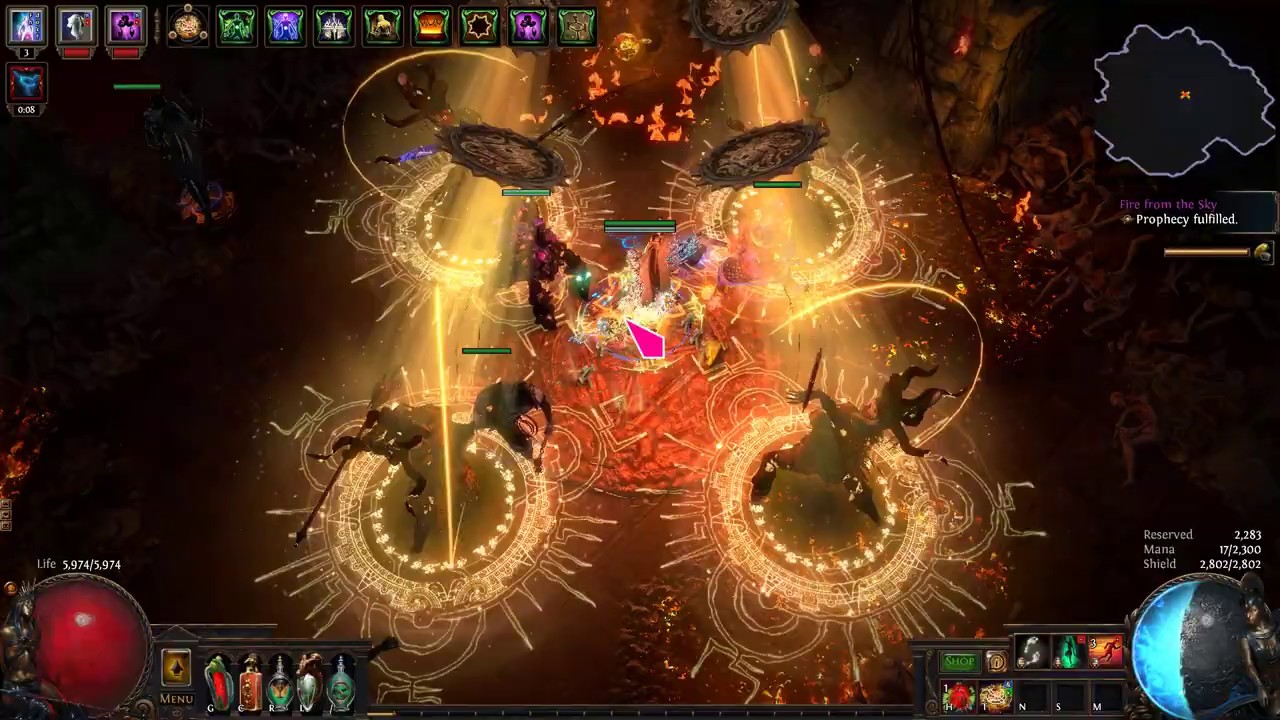 In my, and many other people’s opinions, Uber Atziri is the hardest boss in the game. Few builds can take on Atziri, Queen of the Vaal. This boss creates copies of herself that reflect damage back at the user, resulting in most meta builds incapable of killing her safely.

Before you attempt to kill Uber Atziri, you have to know that there is also an easier form of this boss which is simply called Atziri. To fight the normal Atziri, you need to gather all four Sacrifice Fragments Dusk, Noon, Midnight, and Dawn. You then pop them in your Atlas device to start the fight against normal Atziri.  She will wait for you at the top of a long staircase. Watch out for her phases because she has a lot. The easiest one is the minion phase. During this phase, she will go immune in the middle, and minions will spawn and walk towards her. Make sure you kill them before they get there, or they will heal her. It’s a good way to replenish your flasks. Her other phase is a split-phase, where she separates into four different copies of herself. Three of them do basic attacks, but the one holding the mirror reflects all damage, and you can easily kill yourself on her, so keep an eye out.

Atziri herself has three main attacks. During the first, she simply spins around and throws spears. The second attack creates Flameblasts of varying sizes (they are Flameblasts). Her final attack, Lightning strikes on the floor!

She can spawn from The Apex of Sacrifice map, the Temple of Atzoatl as a Level 3 Royal Meeting Room, or The Alluring Abyss. Those who enter The Alluring Abyss Map must fight Uber Atziri, a version of her that has much more health and damage output. But if you are hit, you’ll probably be killed in one shot. 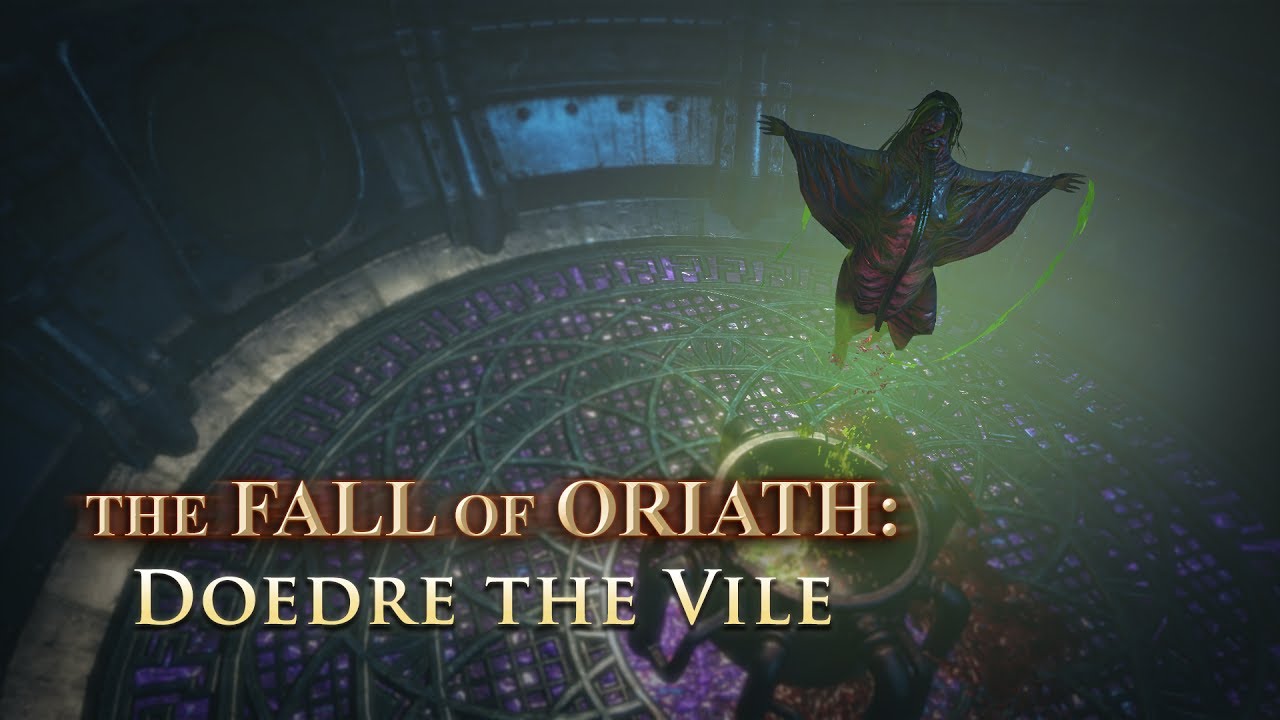 If this list only pertained to campaign bosses, Doedre the Vile would easily be the hardest boss on the list. Softcore builds will be given a reality check on their build’s viability here, and Hardcore players will have to overcome this massive hurdle or risk losing hours of progress.

Doedre deals with insane physical or chaos damage depending on her current elemental infusion, something the player can control. The arena is small, no minions prevent flask regeneration, and her damage can one-shot weaker builds. Grab your Cruel Labyrinth Ascendancy before tackling this terrifying boss.

In addition to the above five bosses, there are many bosses that are not easy to beat, and we will introduce them in the next time, please click here to view it. Of course, you can see hundreds of PoE currencies here, for example, we have Exalted, Chaos, Jeweller ‘s Orb, Orb of Fusing and Regret. Low price, safe, and timely delivery! Cheap PoE currency buy, this is the best place.